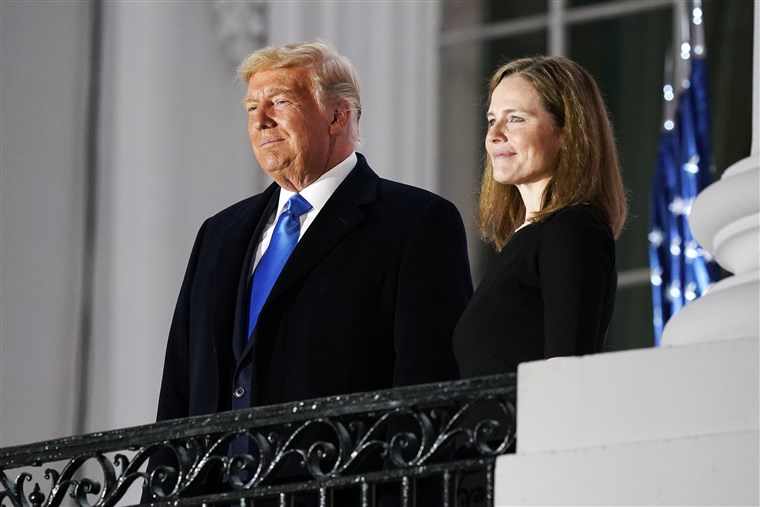 With eight days left until the election, Senate Republicans voted 52-48 to confirm Judge Amy Coney Barrett to the United States Supreme Court. Barrett’s appointment to this lifelong role creates a 6-3 conservative majority in the highest court in the nation. Democrats strongly advocated for the vacancy left by the liberal hero, Justice Ruth Bader Ginsburg, to not be filled until after the upcoming presidential election.

The position was filled in five short weeks in a transition that Democratic presidential candidate and former Vice President Joe Biden described as rushed and unprecedented. Barrett is the third Supreme Court justice appointed by President Donald Trump, following Neil Gorsuch in 2017 and Brett Kavanaugh in 2018. Through the appointments, the President has undeniably influenced the outcome of politically sensitive cases that will affect the nation long after his presidency.

Barrett, alongside President Trump, was sworn in by Justice Clarence Thomas on the morning of Tuesday, October 27. She is a devout Christian that has written and spoken about the significance of her Catholic faith as well as her belief that life begins at conception. Her faith and willingness to overturn Supreme Court precedents have won the support of many conservatives despite her lack of experience.

Prior to Barrett’s Supreme Court appointment, she only spent three years as a federal judge for the 7th Circuit Court of Appeals and unlike most Supreme Court nominees, has never worked as a prosecutor, defense attorney, solicitor general, or attorney general. Barrett has never argued a case before any court or jury thus making her the least experienced justice currently serving on the Supreme Court. Instead, Barrett has spent the majority of her professional career as a professor of law at the University of Notre Dame Law School and has been published in multiple journals including the Virginia, Texas, and Columbia Law Reviews. 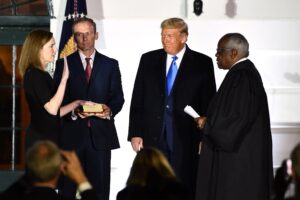 Although Justice Barrett’s background indicates that she has extensively studied the law, her lack of experience in applying statutes to real fact patterns and working with real people is concerning, to say the least. However, Democrats believe Barrett’s views are more unsettling than her lack of practice.

“Chief Justice Roberts pushed the Affordable Care Act beyond its plausible meaning to save the statute,” Barrett wrote.

The content of Barrett’s law review essay foreshadows the position she will take when the Supreme Court rules on the constitutionality of the Affordable Care Act in November. If the law is ruled unconstitutional, millions of Americans will be left without health insurance.

Schumer also asserted that Barrett would be the deciding vote to overturn Roe v. Wade. She has not yet ruled specifically on abortion, but she voted in support of a law mandating doctors to inform parents of minors seeking abortions and tried to allow a law seeking to ban abortions related to sex, race, disability, or life-threatening medical conditions to be reheard. Furthermore, in 2006, she signed her name to a newspaper ad claiming that all signees “opposed abortion on demand and defend the right to life from fertilization to natural death.”

Upon Barrett’s nomination, Kimberly Wehle, a former assistant U.S. attorney and professor at the University of Baltimore School of Law warned that Amy Coney Barrett’s appointment would further divide Americans.

“Barrett’s views on contentious issues like abortion, Obamacare, gun rights, sexual assault, and immigration are well-documented and lean decidedly against the majority of the voting public. Her nomination is thus a political act of splitting,” Wehle explained.

Whether intentional or unintentional, Barrett’s confirmation has widened the divide between Americans and I am sure her rulings will be equally divisive.