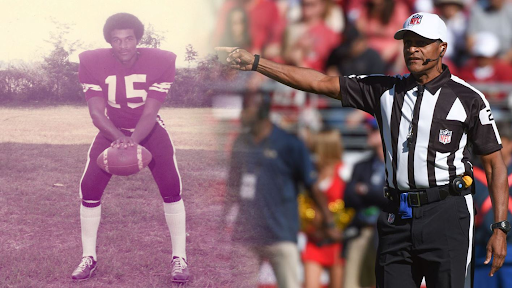 Jerome Boger found a home at Morehouse as the son of a professor. Boger even lived on campus in Robert Hall until he was in the eighth grade. It was when he stepped foot on campus as a freshman in 1973 that he truly began to blossom.

He was a four-year starter at quarterback and leader for the team, especially for the underclassmen looking up to him. Former Morehouse College athletic director and teammate of Boger, Andre Pattillo, remember his impact on and off the field.

“I saw his drive,” Pattillo said.  “Jerome was older than me so I took some of the things that he did to pattern myself behind it that helped me become the person that I became.”

Pattillo played with Boger for two years, as a kicker. Pattillo attributes Boger’s consistent success to his character.

“Jerome has always been a giving person,” Pattillo added. “He’s always wanted to see other people succeed. And that’s why he’s doing so well as the head referee of those crews because although he’s out there in charge, he’s also providing leadership. I guarantee that he’s nurturing someone to step up in his position to be just as successful as he is.” 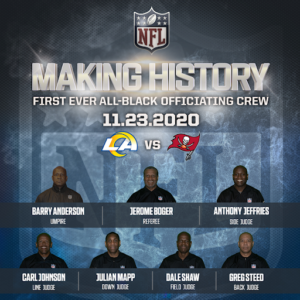 After graduating, Boger worked for Allstate and refereed at the high school level and then moved to college, where he officiated for 11 years with the Southern Intercollegiate Athletic Conference and five years for the Mid-Eastern Athletic Conference. He also had stints with the Arena Football League and NFL Europe.

Between his ties to Morehouse and the profound impact he continues to have on football, Boger makes his Morehouse brethren proud.

“It’s humbling and exciting,” former interim athletic director and Morehouse alumnus, Javarro Edwards, said.  “And I am proud that I am part of that lineage and that legacy and to be one of those people that stands on the shoulders of Jerome Boger.”