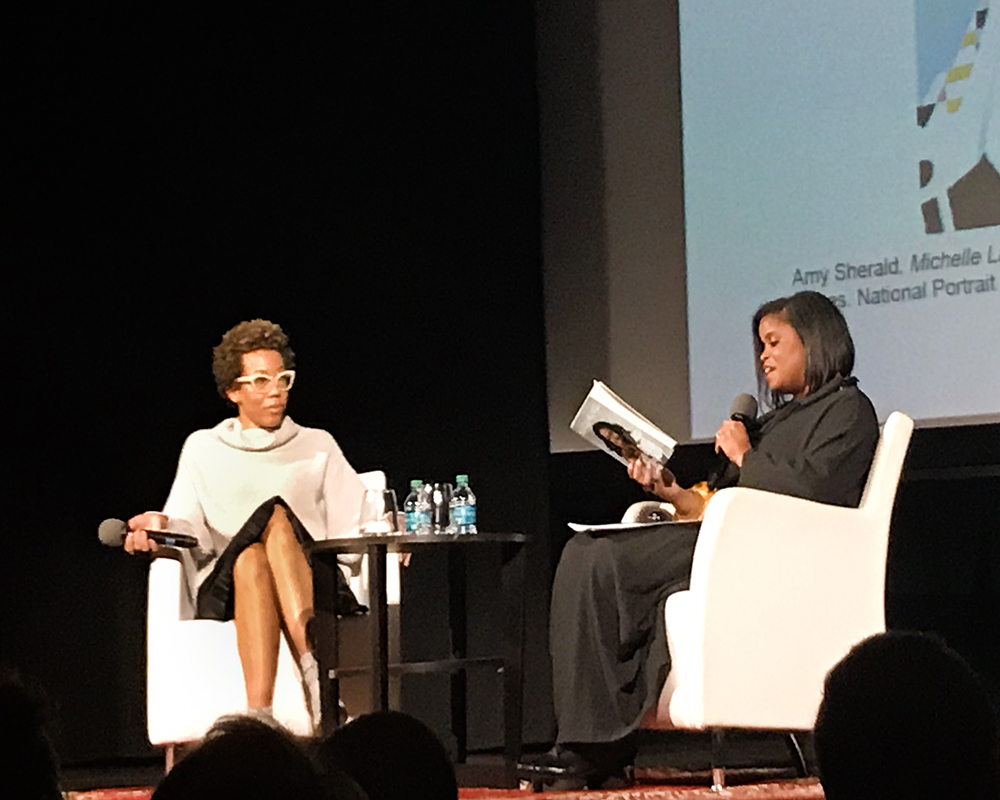 Amy Sherald doesn’t remember much from her early childhood, but during her conversation at the High Museum of Art with Dr. Andrea Barnwell-Brownlee, she easily recalled Bo Bartlett’s 1986 painting, “Object Performance,” as her first introduction to American Realism. As a sixth-grader, it also doubled as her first time seeing a painting of a black person. 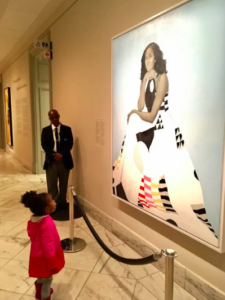 Parker Curry, 2, stands in front of Amy Sherald’s 2018 portrait of Michelle Obama in the National Portrait Gallery in Washington, D.C./Photo by Ben Hines

Sherald’s most recent works hang in the Spelman College Museum of Fine Art, from now until May 18th, in her self-titled exhibition “Amy Sherald.”

Sherald received her Master’s of Fine Arts in 2004 at the Maryland Institute College of Art. She spent some time at home after graduating and visited the Ringling Museum in Sarasota, Florida.

“I came back to Baltimore and, through that experience, decided that I would do some research and see if I could find some images that were extricated from the dominant historical narrative of black history,” Sherald said.

In 2008, she visited the Whitney Museum exhibition, “Kara Walker: My Complement, My Enemy, My Oppressor, My Love,” that depicted in dark tones the raw horrors of slavery in the antebellum South. She left the museum attempting to reimagine the black image.

“In processing what I had seen, I realized that there was a space or a conversation that, at the time, wasn’t being had — a different portrayal of blackness.”

She checked out the film “Big Fish” while trying to figure out what she calls her “art DNA” — what she was going to paint.

“It was a light-bulb moment,” she said. The movie echoes tones of magical realism as it’s about the strained relationship between a father and his son, who just can’t believe his dad’s seemingly unconventional stories. But it turns out the stories were true. 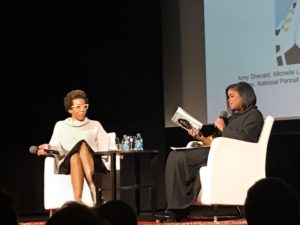 Sherald was inspired by the narrative of the movie “and I recognized that there were limitations in the way that I got to know myself as a black person because of the (negative) narrative that stays with us.”

So began her quest to find her authentic self, before others’ expectations dictated how she interacted with the world.

“Everything became about fantasy,” Sherald said. “I realized that so much of my identity had been formed through self-repression or assimilation. Everything was constructed for me.”

Her signature grayscale style evolved while she was creating “Hangman,” her 2007 painting.

“I painted gray first and then did the brown washes, and stopped in the middle,” she said. As she reworked the painting, “I went all the way with the gray and it just looked really great so I stuck with it.”

In 2011, Sherald spent a year in Norway studying under Odd Nerdrum, a Norwegian figurative painter. Nerdrum helped establish Sherald’s foundation as a painter.

“Since I was premed, I changed my major late,” Sherald said. “So, I really never got to have those classes that everybody else had. I consider myself self-taught but in watching how he painted and how he interacted with students, I began to understand what I was doing and everything became easier.”

Things went unscripted when Sherald had a heart transplant in 2012. Despite being an avid runner and without experiencing symptoms, she had been diagnosed with heart failure.

“You can’t plan for your body to betray you,” Sherald said. “It’s really beautiful ’cause now I have a second family.

“You learn so much being at the brink of death that if you’re not living fearlessly, you start.”

While much of Sherald’s life has veered off course unexpectedly, she continues to live her dream of reimagining black people in a style that has never been seen before.