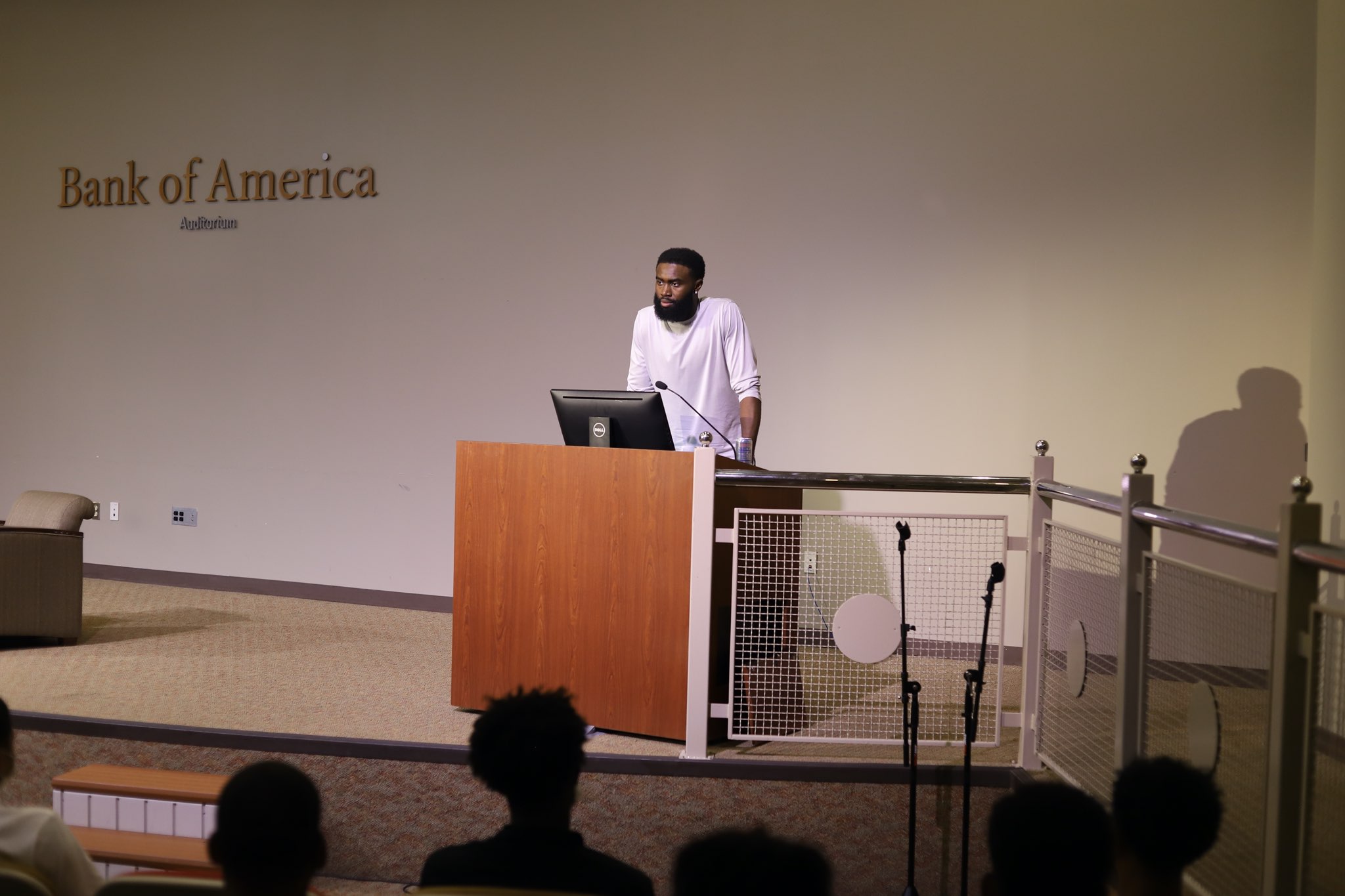 NBA and Boston Celtics star Jaylen Brown in 2015 was ranked fourth on ESPN’s top 100 list, a McDonald’s All-American, and a five-star recruit. On the court, he was one of the best during his time in high school. So why would he pick a school like the University of California, Berkeley to continue his basketball career over powerhouse schools like the Kansas Jayhawks and Kentucky Wildcats?

UC-Berkeley had produced notable players like Jason Kidd, Kevin Johnson, and Shareef Abdur-Rahim. But nothing like Kansas and Kentucky, which were originally his first two choices.

It all goes back to a traumatizing experience during Brown’s senior year at Wheeler High School in Marietta. As he stood at the podium in Bank of America Auditorium on August 26 to tell this story to about 100 Black men and women at Morehouse, he announced that he has never shared it publicly.

Six years ago, he was late for school to receive awards for both his skills on the court and his benevolent ways off the court. He was driving through a neighborhood that he always went through to get to school. While rushing to school, Brown went through a stop sign and saw a police officer in his vision. Instantly, he knew he was going to be pulled over.

As expected, the cop stopped him. He immediately called his coach and mother to tell them he was going to be late to school. The officer then walked up to his car and had Brown explain why he went through the stop sign. As he tried to explain, the cop told Brown to stop talking, which confused him. When the 18-year-old felt the situation getting tense, he put his hands on the steering wheel.

Brown sat in his car for a half-hour until another police car came. He was in disbelief. The second cop then walked up to his car with his hand on his weapon. He told Brown to get out of his car.

“At that moment, everything left my body,” he said. “My face is blue, I’m thinking the worst. My life flashed in front of my eyes.”

Brown described his body as being stuck. The officers told him to get out, but he couldn’t. His body was shocked. They tried to open the door, but the car was locked. One cop tried so hard to snatch the door open that he fell.

The teenager finally opened the door and he was pulled out aggressively while the other cop searched his car. He was finally allowed to make a call, and the only phone number he knew in his head was his mother.

She worked 25 minutes away but was there in two. He was shocked at how fast she got there.

“The reason why she got there so fast was because she was in the back of the school ready to come out and surprise me for all the awards I just won,” Brown said.

He won positive athlete of the year, Mr. Georgia Basketball, and most likely to be a millionaire, among others he would be honored for. Instead, he was arrested and taken to jail because his license was suspended since he had not changed the address on his driver’s license. His bond was $2,900.

He finally revealed his story to the public because he was at Morehouse, an all Black-male college. Previously, he kept it hidden because the perception of having a criminal record embarrassed him. But Morehouse seemed to be the right place to tell his experience.

Brown’s story circulated through the media and social media. People ridiculed him for potentially blowing his chance. This is where UC-Berkeley became his only choice.

UC-Berkeley has a history of social activism on campus. According to History.com, it was the first major college to have a student uprising in 1964 when a student activist named Jack Weinberg was arrested for handing out leaflets. As a result, thousands of students surrounded the police car to prevent it from going anywhere for 32 hours.

That is the type of history that attracted Brown. He described it as going there for an academic reason while he played basketball. His new school educated him on how to make a difference and he never stopped learning to do so.

During his speech to Morehouse students, Brown emphasized three points –  increasing their activism, using their platform, and navigating their institution.

All three of his points undoubtedly came from his experience with the police. His willingness to protest during the Black Lives Matter movement, using his social media to spread a message, and wanting to go to a school for activism rather than for its basketball program are all prime examples.

Now his examples and messages are affecting others.

Brown’s experience evolved him to become the man he is today in the NBA. He’s currently the vice president of the National Basketball Players Association and has a program in the Boston area for underprivileged kids to begin their STEM careers. At the end of the program, they are guaranteed an internship with companies like NASA.

Morehouse Professor David Wall Rice had nothing but praise for what Brown is doing.

“He’s a super open person, he’s really invested in the community,” Rice said. “He’s a good person, he’s authentic, he’s sharing what it is he’s learning with folks in a way that allows him to learn as well, and I think that’s the core of what education is. … I just think he’s a good dude.”